The Baise is a small breed of pony-size horses that have been raised in the pastures of the autonomous Guangxi region of China since more than 2000 years. With their comfortable size, adaptability, and quickness, they serve as an excellent means of communication, and for types of works. Surprisingly, these horses are also used for meat by the local people. They are also known for their good temperament. 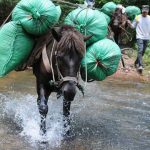 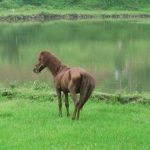 The Baise Horse is very primitive and originated in China’s Guangxi region. Guanxi’s climate is such that, it is apt for breeding and rearing equines, and hence, it has been a common practice since ages.

Baise Horses were usually raised in the hilly regions – the high altitudes, and during farming seasons, when not working, these animals were allowed to roam around freely in groups.

In Guangxi, a protected area has also been set aside for these small equines, popularly known as the ‘National Baise Horse Genetic Resources Conservation Area’.