The Guizhou Pony is an incredibly pure breed of ancient Chinese equines that was developed in Guizhou, mainly by the farmers, as a working pony. These little horses are active and vigorous, highly adapted in travelling through hilly regions even in the sun, and can still remain calm. They are able to trot at a steady speed for long distances. Interestingly, pure breeding has well been maintained for these equines, since the outside breeds proved to be unsuccessful. This pony is still classified as a native breed. 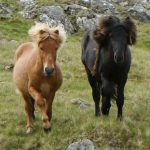 The Guizhou ponies were developed in the region of Guizhou in China, which is a mountainous province. The main profession of the inhabitants of this region is agriculture, and it was developed by these farmers back in 770 B.C. in its basin area.

Basically, the Guizhous were bred for cultivation and trade purposes, since the trade in horses and salt in the province was of utmost importance. To be precise, these small ponies were used more for cultivation and transportation in the hilly areas, rather than agriculture, and this is quite evident from their smaller stature.

In the 1950s, a few other equine breeds from other countries were imported though, but failed to serve much for the purpose. Thus, the Guizhou ponies continued to be purely bred.

This breed is made of two different types of equines, with one being more suited for riding purposes, while the other variety being stronger, and usually used as a pack animal. Till date, it is a very common breed, found all over China, especially in the region where it was developed.