The Indian Half-bred, a type of horses from the Indian subcontinent, is a cross between Thoroughbreds and local, as well as imported horses. Widely used as a cavalry horse and polo pony by the Indian armed forces and the Police Service, these horses are now developed throughout India, including the Baburgarh army stud and Saharanpur remount depot. 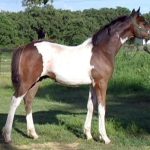 During the 19th century, the Indian cavalry had used primarily Arabian horses for their requirements. Later, they were replaced by Australian Walers, which served as the principal mode of transportation until the emergence of mechanized systems. In the 20th century, a significant number of English Thoroughbred stallions were added to the Half-bred’s breeding stock that included the Walers, native Kathiawaris, and Oriental horses.

During India’s partition in 1947, eight English and four French Thoroughbreds were retained and used for further refinement of the Half-bred horses. Aside from the local country-bred mares, imported-brood mares including Argentine, French Bretons, and Polish Masuren and Malapolski are now used for the development of this Indian horse type.