The Norman Cob is a breed of mid-sized light draft horses that hails from the French province of Normandy. Even though it has been selectively bred to produce general subgroups within the breed that are characterized by different heights and weights, it has a great degree of similarity with a Thoroughbred in terms of its conformation. It has an elegant appearance with a short back and an overall square profile. 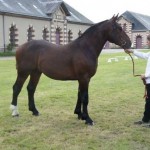 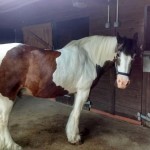 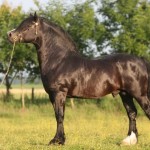 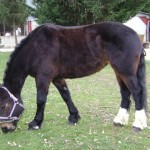 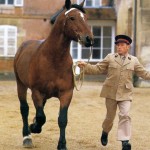 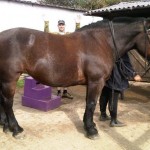 The small bidets, brought by the Celts to the provinces of Normandy and Brittany, were the first horses that were introduced in the region. These horses were later bred with larger mares by the Romans to create Norman horses. In the 16th century, these animals gained popularity throughout Europe for their strength, sturdiness, and the ability to pull. These Norman horses, popular as Carrossier Normand, were the ancestors of the Norman Cob. In addition to the Carrossier Normand bloodline, the breed was also influenced by the Danish, Gelderland, and the Mecklenburger horses. During the mid-19th century, the breed was further improved by introducing the Norfolk Trotters.

In the early 20th century, these were regarded as the finest carriage horses available. However, their demand declined gradually with the introduction of machinery and automobiles, resulting in a division within the breed. The lighter and faster horses became the Anglo-Norman (suited for cavalry and riding) and the French Trotter (suited for driving) while the bulkier and heavier horses came to be known as the Norman Cob. Following the extinction of the Carrossier Normand in the 1920s, the Norman Cobs were intensively used in agriculture. With the modernization of farming techniques in the 1950s, their numbers started declining as the breeders produced them for meat.

The Saint-Lo Stud had 60 Norman Cob stallions in 1976, and in the same year, the studbook placed the breed in the category of draft horses. The breed registry was reorganized to focus on reinvigorating the breeding program, as also to concentrate on the possibilities of extinction. Genetic and demographic analysis conducted by several research institutes in the 1980s showed that the breed has genetically deviated from its original traits. In an attempt to maintain the breed’s quality and redirect it towards recreation and driving activities, a new studbook with new criteria was established in 1992.

Today, most of the Norman Cob horses are found in the French departments of Calvados, Orne, and Manche. Their population in the recent years has remained somewhat stable. In 2005, around 914 mares were bred, and 65 stallions were recorded as active. The annual birth rate for the Norman Cobs during 1992-2010 varied from 385 to 585.