The Qatgani Horse is a native breed from Afghanistan and is a usually bred for light riding purposes. 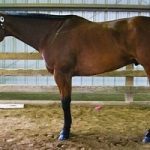 The Qatgani horse was developed for the first time in Afghanistan. Very little has been known about these horses mainly because the region in which these equines are primarily found is mostly inaccessible to the outsiders. The Qataghanis belong to one of the twelve breed of horses that has been reported to the database of livestock breeds published by the Domestic Animal Diversity Information System, or DAD-IS. The Qatgani breed got its name from where it originated, which is the former ‘Qataghan’ province of Afghanistan.