As the name suggests, the Russian Draft Horse is a breed of purely Russian equines that developed in the 19th century. Known for having an excellent traction while drawing weight, they are now bred in the North Caucasus, Ukraine, Sverdlovsk, Perm, Vologda, the Archangel regions, western Siberia, and in Udmurtia and Byelorussia in Kirov. Because of their high energy, adaptability as well as high-profit feeding, they eventually proved to be a great success as a working breed, exquisitely pliable in pulling drafts especially because of their characteristic short legs. 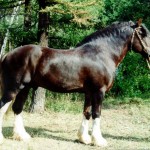 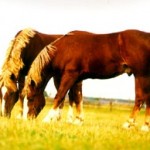 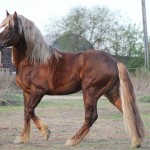 While the systematic breeding of the Russian Heavy Draft horses officially began in the mid 19th century, these equine found their origin crossed with the other equine breeds – the Ardennes, the Belgian Draft and the Orlov Trotter horses. The information and record of this breed have been kept by the VNIIK (translated ‘All-Russian Institute of Horsebreeding’), wherein, Dr. Irina Sorokina had long been in charge of the local draft breeds of Russia.

During the period of the formation of the breed, four breeding centers, namely the Chesma, the Dubrovsk, the Pershino, and Khrenov studs played an important role of particular importance. The breed had been used to improve agricultural stock. Even to the present day, many horses, carrying the genes of the RHD can still be seen pulling carts outside of major cities, especially in the countryside.

In 1900, these horses were introduced for the first time to public, initially, at the Paris Exhibition, after which, they were almost wiped out after the commencement of the two World Wars. By 1937, the stock of these purebreds was reconstituted and isolated as an independent breed.

Later, in 1952, the horses were developed by crossing with the warmblood breeds including the Percheron, the Orlov Trotter, and the Ardennes from Belgium. During this period, the Ardennes type of these crossbreds happened to gain much popularity in Russia. Even in such regions where there was a demand for big-sized heavy drafts, these horses were mated with the Brabancons breed. The resultant crosses retained the old denomination of Ardennes.

Additionally, the milk of the mares of this breed was thought to increase immunity to disease, improve digestion, and stimulate the appetite, was recommended for such varied conditions as gastritis, anemia, tuberculosis, and impotence. This striking information is also found in the work of the literary masterpieces of the nineteenth century, including Mikhail Lermontov, Alexander Pushkin, and Leo Tolstoy.

By traits and characteristics, these equines has be classified into three different types: