Tokara or Kagoshima pony is a small-statured pony indigenous to the group of Japanese islands of Tokara in the Kagoshima Prefecture. Known for its ability to withstand hot weather, the Tokara can be used for riding and farm work. 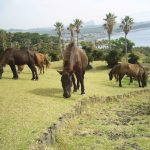 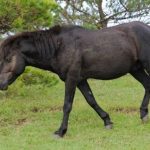 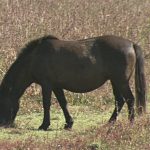 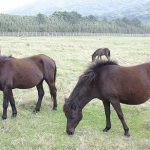 In the early 1950s, Professor Shigeyuki Hayashida of Kagoshima University noticed a group of 43 ponies roaming in the southern parts of the Tokara Islands. He believed that these Tokara ponies were brought to the island from Kikaijima at the beginning of the 20th century. In 1943, the popularity of the breed reached its peak with their numbers reaching 100 heads.

However, after the Second World War, agriculture became mechanized, and the demand for Tokaras as plow horses decreased, causing a decline in their population. As a result, some ponies were taken to the Iriki Farm and Mt. Kaimon. By 1974, only a single pony existed on the island. It was taken to Nakanoshima where it was bred with other Tokara ponies that were brought from the mainland.

A breeding farm has been set up at Takao, and the total population of Tokara ponies has now reached to 107.