The Vlaamperd is a highly rare breed of horse, developed in the Western Cape area of South Africa by crossing the Friesian, Hackney, Thoroughbred, the Cape harness horse alongside other assorted heavy Warmblood equine breeds.  The Vlaamperd is a translation of the African word “Vlaamse perde”, that meant Flemish horses, referring to the Friesian breeds from which it actually descended. 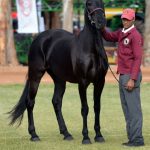 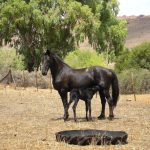 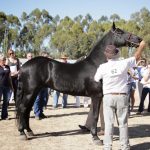 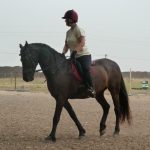 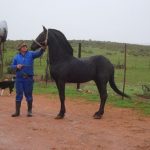 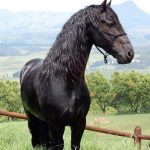 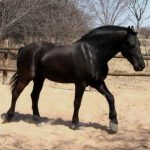 This breed originated from the 19th century Hantam horse which was developed by crossing the local mares with several Thoroughbred and Arabian horses which were imported to South Africa in 1820 by Lord Charles Somerset. By the time the Anglo-Boer war ended in 1902 a few Friesian horses had been imported to South Africa by a funeral undertaker of Cape Town, which were also crossed with the Hantam mares. Other breeds like the Hackney,Cleveland Bay, Cape Harness and Oldenburg were also included in the breeding process. The Hantam horse  gradually became extinct and was replaced by a more powerful working breed also capable of doing harness work.

A stallion named Kemp produced by crossing the East Friesian and Oldenburg horses was one of the foundation sires of this breed. However, later, another stallion named Scheepers, foaled in the year 1930 had a very significant influence in the breeding as well as development of the Vlaamperd horses.

At this point, the Dutch government made a restriction of exporting the Friesian breed from the Netherlands. Thus, in order to violate this law in an indirect way the South Africans started importing the Friesians fro Antwerp, Belgium under the name “Vlaamse perde”.

For the preservation and protection of this breed, the Vlaamperd Breeders Society was founded in Bloemfontein in the year 1983.

Being on the verge of extinction, it is very less in numbers and mostly used for tourism and a lot of South African festivals.