The Yakutian Horse is an extremely hardy breed of Siberian horses that are known for their adaptation in extreme cold weather. Developed in the Far-East Siberia, this breed is used for several purposes including general riding, meat and milk. The warm coat of these equines can be turned into clothes. Maintenance of this breed is also easy, for which they are highly popular in Siberia. The main responsibility of the owners is to protect them from wolves, and take care of them including cleaning from the snow regularly. 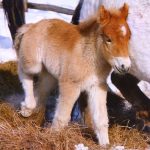 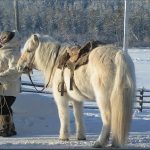 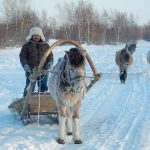 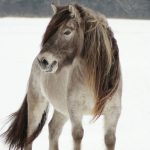 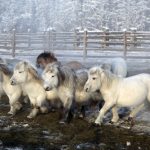 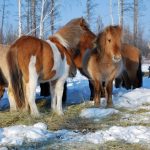 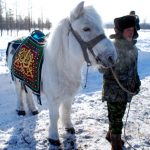 Video: Yakut Horses Moving and Feeding Grass in the Snow

A new scientific study involving comparison between the genomes of two ancient Yakuts from Siberia and nine living ones has concluded that the present stock of the Yakutian horses was developed between the 13th and the 15th century after the Yakut people migrated into the Siberian realms.

These horses came directly from the domestic horses which these Yakut people had brought with them. Contrary to a common belief, they are not the descendants of the native wild horses belonging to the Neolithic times that once inhabited the snow-covered regions of the Russian province of Siberia.

The Northern Type: The purest bred Yakutian horse, and is the most valuable. Also called the ‘Middle Kolyma’ or ‘Verkhoyansk horse’, they have primitive markings e.g. the zebra-like patterns on the legs, and dark dorsal stripe.

The Larger Southern Type: Resulted from crossing with other local breeds like Suntar, Megezh and Olekminsk, and are extensively spread throughout central Yakutia region.

The Smaller Southern Type: Relatively less valuable, and are shorter than the previous type, but are purebred.

The Yakutian horse is a good producer of meat. They can produce up to 105 kilos of live weight meat when they are 6 months old, 165 kilos by 30 months, and about 228 when adult.

Their milk production is also high, with the lactating mares in the experimental farm of the Yakut Institute of Agriculture producing 1200-1700 kg of marketable milk in 6 months time.