The Bali Pony is an ancient breed indigenous to Bali, the Indonesian island. Having a robust and hardy disposition, they are used for performing several tasks, also serving as mounts for tourists. 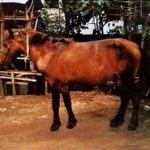 There has been no concrete information about the roots of the Bali Pony. However, researchers in the 20th century made an attempt of tracing their origins. From the studies they presented, it was revealed that Chinese had brought them to the Java island of Indonesia in the 6th century as gifts for the king. If this information is valid enough, then this breed could have its lineage linked to the Mongolian horse. Moreover, some horses from India were also transported to Indonesia, though the names of them, in particular, are unknown. Horses were also brought from Netherlands to Indonesia by the Dutch in the 18th century. The crossbreeding of these breeds may have led to the development of the Bali pony.

Because of the lack of a proper breeding program, this breed has a somewhat unrefined conformation, though they are strong and hardy enough in comparison to their size.

They have not been selectively bred for a particular purpose but can perform several tasks needed by the local people like carting stones and corals from the beach.