The Dongola horse is a riding breed, indigenous to the African countries of western Eritrea, Cameroon, and Sudan. These rare equines excelled as riding horses, also used for developing other breeds. 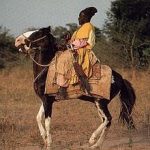 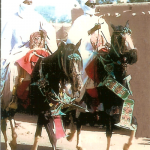 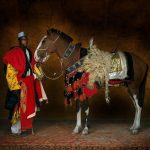 Though named as Dongola, sources have stated that it may not originate in this particular region and are far more popular in Cameroon, used to meet the various needs of people there. Besides being linked to the Barb, it is also said to have a striking similarity with the Arabian horse, particularly regarding temperament. The Dongola horse also seems to descend from the Iberian breed partially, brought in the 13th century from Numidia to Egypt.

Because of their strong stature and excellent riding abilities they had been of immense use in the past. The King of Sennar had obtained some of these horses in the year 1772, describing them to be of a fine quality with a strength equivalent to coach horses, though light and free in movements and spirit.

They also served as cavalry horses for the Abyssinian troupes during the Italian-Abyssinian war. Moreover, the lighter version of the hunter horse developed after importing the Dongola to Italy, while Germany too conducted similar experiments. Certain other horses are regarded to be strains of the Dongola, including Fulana (North Africa); Hausa and Bornu (Nigeria); Bahar-el-Ghazal (Chad); Djerma, Songhai, Mossi, and Yagha (Niger Bend). In fact, these breeds collectively are referred to as the West African Dongola or even the West African Barb.

The original version of Dongola is mostly extinct one of the prime reasons being mixed breed with the Barb, Arab as well as their crossbreeds. Another reason for its decline may also be the lack of proper initiatives to improve the condition of the breed.