The Jutland horse, originating in Denmark attained its name from the Jutland Peninsula located in the west of this country. Having a heavy body stature, they had primarily emerged as draft horses in the ancient times also gaining popularity in horse shows, films as well as festivals. This compact, muscular equine breed possesses a calm and gentle temperament also having the willingness to work, thus emerging as the national pride of the Danes. 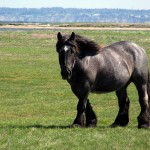 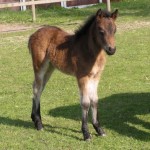 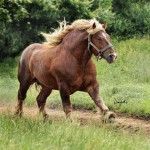 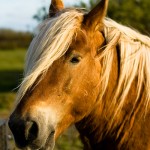 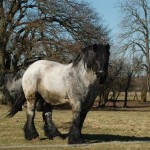 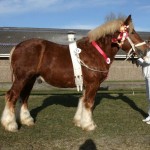 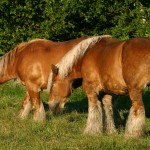 Though there is not much detail regarding the origination of the Jutland horses, evidence reveals that the Vikings used their ancestors during the early part of the ninth century. In fact, in images obtained from that time, the Viking raiders are seen riding on horses that appear similar to the present day Jutland horses. Some of the ancient equine breeds immensely contributed towards the development of the Suffolk Punch, which in turn seems to be one of the equine breeds responsible for creating the Jutland horse. This breed had first been mentioned during the 12th century, attributed as war horses. Another Danish breed responsible for influencing the Jutland around the 18th century is the Frederiksborg horse that had a Spanish influence inherent in it, used in giving this breed a steady and improved gait.

The development of the modern breed started in the year 1850 when the Suffolk Punch and the Ardennes were involved in a crossbreeding program (draft horses of France and Belgium) with the local thoroughbred horses. The Yorkshire Coach horse and the Cleveland Bay was further included in the 19th century.  However, a stallion by the name of Oppenheim LXII imported to Denmark from England in the year 1862 immensely contributed towards the formation of these Jutland horses. There are contradictions regarding its parentage as some consider it to be a purebred Suffolk Punch while others feel that it is a cross between the English Shire and Suffolk. Though it had a very short lifespan of just seven years, it was the father to many foals. In fact, Aldrup Menkedal (also known as Oldrup Munkedal) born in 1893, belonged to the sixth generation of the Oppenheim, also regarded as the founding stallion for the modern Jutland horses. In its lifespan of 16 years, it had fathered approximately 1500 foals out of which 454 had been recorded in the herdbook. Most of the Jutlands of the present time are descendants of the Prins of Jylland (Prince of Jutland) and Hovding (Chief) —- the sons of Aldrup. They also bear a striking resemblance to the Schleswig, a German horse sharing the same parentage as the Jutland.

In the year 1881 the first stud book for these draft horses had been formed registering about 22,000 horses up to 2007. The year 1887 saw the formation of the breeders association for this breed whereas the Cooperative Jutlandic Breeding Association had been set up the following year. In the same year (1888), the first stallions began to be evaluated by the set breeding standards. The Federation Funen Horsebreeding Societies was further established in 1898 to promote the breeding of the Jutland and other draft horses. Their population shot up to more than 15,000 by the 1950s, with 405 stud farms in Denmark solely dedicated to their breeding. According to the estimation provided by conservation organization of Denmark, there are about 1000 Jutland horses as of 2011.