The Manipuri horse is a rare Indian equine breed popular as a polo and military horse. Its striking features include its hardy stature, high endurance level, and versatile nature. 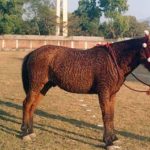 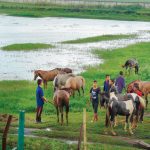 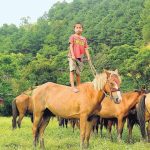 There have been varied opinions and contradictions regarding the source of origin of the Manipuri horse. Some experts opine that the Tibetan Pony, imported to India, over 1000 years ago, is the ancestor of the Manipuri pony. Others believe it to be developed by crossing the Arabian and Mongolian Wild Horse. Being bred for more than hundred years in Manipur ( northeastern part of India), the Manipuri Pony was first mentioned in the Manipur Royal Chronicle, dated 1584. The next century witnessed its frequent reference in Manipuri literature.

Their usage as efficient cavalry horses proceeded throughout the 17th as well as the 18th century. In fact, the Meltei warriors rode on them in their quest to win battles and these horses also had a pivotal part in the Manipuri king Garib Newaz’s cavalry.

In the year 2007, a genetic study conducted for five Indian breeds, namely, Manipuri, Spiti, Marwari, Zanskari and Bhutia revealed that this breed had its genes related to all the breeds except the Marwari horse. In fact, it is also said to have distant relations with the Sumba, Batak and Burmese ponies. There has been several myths regarding this breed and it seems to be an integral part of rituals as well as spoken of in ballads.

As a polo horse

The Manipuri pony was immensely sought after by the British colonists from 1859 to 1916 as mounts to play a game of polo, which had been immensely popular in Manipur as early as the seventh century. In fact, they even infused Arabian blood during the 19th century for the purpose of improving the standards of their polo ponies. A large number of these Manipuri ponies were imported to the West as polo mounts, with the size of polo ponies being limited to 13 hands, later changed to 14 hands and finally omitted. In fact, they were imported in such huge numbers that the region experienced a dearth of them. In fact, for the purpose of maintaining their numbers, the export of these horses had been banned completely at one point of time. The Manipuri Horse Riding and Polo Association had been formed in 1977 in order to promote the betterment of this breed as well as the game.

Their population has gradually declined to 1000 to 2000 ponies on an average. The reason for this might be that these horses were smuggled to Burma in massive amounts where their demand seems to be high.  For the purpose of promoting them as well as preventing this breed from becoming extinct the Manipuri Horse Riding and Polo Association formed a heritage park in the year 2005.

According to the livestock census conducted in the year 2012, their numbers were as low as 1100, and might soon be declared as endangered species.