The Narym Pony was developed in Russia, and is known for their similarity in appearance with the Priob breed. This is a domestic breed, and is mostly used as a draft horse for general riding and working purposes. 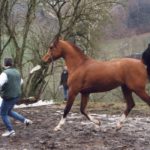 The Narym Pony is very similar to the Ob (Priob) breed of ponies and originated in western Siberia, a region close to the Ob River. They are a little larger by size than the Ob Ponies. These equines are bred in both the northern and the southern regions. While the southern population is frequently crossed with draft and trotter equines to develop a larger size, the northern Narym ponies are purely bred.