The Gypsy Horse is a small-sized draft horse that was first bred by the Romanichals (Gypsies) of Great Britain. Its strong muscular figure with the structure of legs is well suited to pulling activities. Its ‘piebald’ coat color and the extensive feathering on the legs are two of its most distinguishable features. However, some of the horses may also have any other coat color. A common sub-type of this breed having a similar appearance is called the Drum Horse. While the Gypsy horses are displayed and sold by the breeders at conventional fairs in the UK, horse shows and sporting events in the US have become extremely popular in which these horses participate every year. 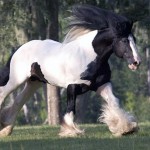 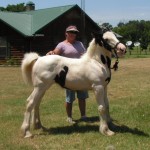 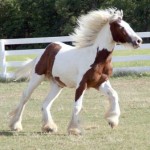 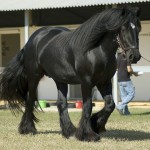 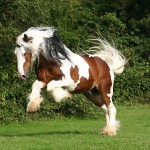 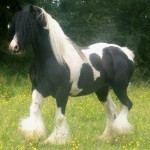 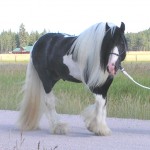 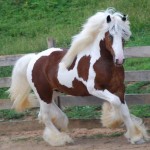 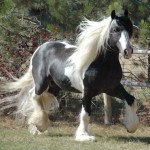 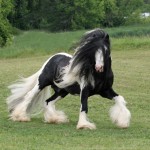 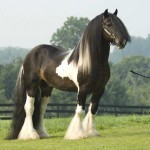 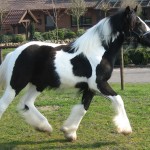 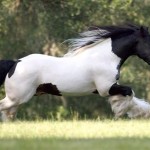 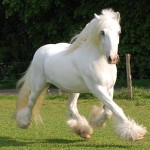 For centuries, the Romanichals have traveled throughout the Europe in beautifully decorated vardoes and caravans. To maintain their way of living, these nomadic people started breeding the first Gypsy horses back in 1850 with the intention of using them as a pulling horse for their living wagons. The present form of this horse took years of careful breeding and was created shortly after the end of the World War II.

This extraordinary horse breed was trained and managed in a unique way, so that it could have the strength and endurance to pull the heavy wagons, feed on any grass found on the roadside and remain calm, since confusion and panic could cause damage to the wagon. During World War II, the horses with the spotted coat pattern were quickly replaced by the colored ones, which are considered more popular even today.

Apart from plentiful feathers, precise colors, and greater bone density, the Romanichal breeders preferred smaller sized horses with high knee action. Therefore, the breeders used the Section D Welsh Cob breeding to help the Gypsy Horse have a more lively and energetic trot. Since during the 1990s the average height of the breed was more than 15 hands, the breeders wanted to reduce the size to 14.3-15 hands, as it is much more economical to raise a smaller horse. As a result, the Dales Pony and sometimes the Fell Pony were used for interbreeding with the Clydesdale and the Shire horses. The offspring thus created laid the foundation of the present Gypsy horse.

Starting in 1996, a set of associations and registries including Gypsy Vanner Horse Society, Gypsy Horse Registry of America, The Irish Cob Society Ltd, Gypsy Cob and Drum Horse Association, and some others were established. The Gypsy horse was first brought to the US in 1997 by the famous discoverers Dennis and Cindy Thompson. From 2000 to 2012 around 1700 horses, mostly the Gypsies, were imported to America by the famous North American horse importer/breeder Black Forest Shires & Gypsy Horses.