The Konik is a breed of small, semi-feral primitive horses whose grazing habits have been deemed useful for making delicate wetlands fit for habitation. The word konik is a diminutive of the Polish word kon, which means horse. The Konik horse has several primitive hair coat markings. It is characterized by dorsal stripes and has the dun gene affecting its coat color. The horses are now under the human guidance and are bred in either open reserves or barns. 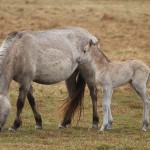 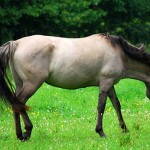 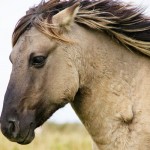 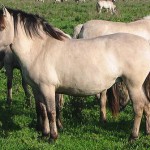 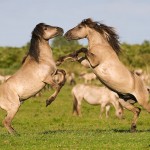 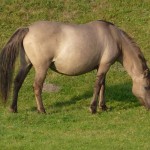 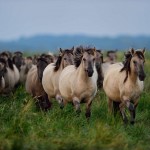 There are some contradictions regarding the ancestry of these semi-feral Polish horses. It has been claimed by many researchers and biologists that the foundation stock of the Koniks was a hybrid developed in the early 19th century as a result of breeding wild horses with domestic draft horses. However, recent genetic studies have confirmed that the Konik is not a descendant of the Eastern European Tarpans (wild horses). The mDNA (Mitochondrial DNA) and Y-DNA in the Konik is quite similar to that in other domesticated breeds.

During the First World War, the Russian and German forces called these animals “Panje horses” and used them for transportation. The landrace of Bilgoraj (Panje horses) captured the attention of a Polish agriculturist Tadeusz Vetulani. In 1923, Vetulani coined the term “Konik” (meaning “small horse”) to describe these horses. During the 1920s, both private and public studs were formed, and many efforts were made for the conservation of these animals.

A Konik reserve was opened by Vetulani in the forest of Bialowieza in 1936 with the objective of exposing these horses to natural conditions and restoring their original characteristics. Even though the experiments of Vetulani were made public, his stock did not have a major effect on today’s Konik population. His experiments, referred to as the “breeding back” project, came to a halt during the Second World War. The stock was shifted to the Polish village Popielno, where the horses retained their semi-feral behavior. During the 1950s, Popielno became the most important stud for the breed.

Between the First and Second World Wars, Lutz and Heinz Heck crossbred Przewalski’s Horse stallions with Konik mares, as also with Icelandic horse, Gotland Pony, and Dulmen Pony. They intended to develop a breed that has the visible traits of the Tarpan. Moreover, some breeders crossed the Konik horses with Thoroughbreds or Anglo-Arabians to improve their riding abilities.

The six foundation stallions from which the Konik Polski has been derived are distinguished into the Liliput lineage, Wicek lineage, Myszak lineage, Goraj lineage, Glejt I lineage, and Chochlik lineage.